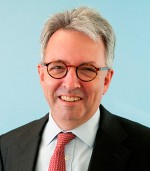 Mr Woods joined Oikocredit as managing director on 1 January 2013. Mr Woods holds a Bachelor of Arts from Harvard University and has an extensive background in international business.

Mr Woods began his career with Royal Bank of Canada, where he held several positions before moving to Dutch-based financial institution, ABN AMRO, where he stayed for twenty years.

His roles with ABN AMRO included global head of e-commerce for financial markets, country head for Japan and Sweden and later COO/CFO for the Middle East.

Before joining Oikocredit, Mr Woods held leadership positions in various organisations in the United Arab Emirates, including CEO of a regional investment bank.