In India, some 270 million people, a fifth of the population, lack access to electricity1. Some 90% of the country’s off-grid communities are based in remote, rural areas, with many households depending on costly kerosene for lighting and cooking, exposing their families to toxic fumes. Where families are connected to the grid, they often experience an unreliable, intermittent electricity supply, as power generation struggles to keep pace with the country’s rising demand. And without affordable power, many people remain trapped in a cycle of poverty, unable to improve their livelihoods.

In rural India, a lack of access to fundamental services, including finance, presents a further barrier to development. With the nearest bank often miles away by foot, 87% of the poorest households lack access to credit, and 71% have no formal savings2. Banks often hesitate to open branches in rural locations, given the need to rely on expensive diesel generators for power and connectivity, and replenish diesel supplies in nearby towns.

This is where Oikocredit partner organisation E-Hands Energy comes in. The Chennai-based renewable energy business sources and provides solar mini-grids and wind-solar hybrid systems to rural branches of banks and microfinance institutions in 15 states, helping them to deliver vital financial services using 100% clean electricity. To expand its reach and serve more customers, the company required capital, but faced challenges in borrowing from traditional lenders, who are often unfamiliar with the country’s relatively new but expanding renewable energy industry and associated policy and markets.

With a strong commitment to helping small businesses generate social impact, Oikocredit partnered with E-Hands Energy in 2017, providing a three-year US$ 200,000 loan to help E-Hands bring solar power to 119 rural branches of the Union Bank of India, one of the country’s largest government-owned banks. The solar-powered branches are set to help more than 950,000 people in rural communities gain access to finance over three years, across states including Madhya Pradesh, Andhra Pradesh, Maharashtra, Uttarakhand, Jharkhand, West Bengal and Odisha.

“We were particularly interested in the double benefit offered by E-Hands Energy’s solar-powered rural banking service,” explains Kiran Kodi, Renewable Energy Manager at Maanaveeya, Oikocredit’s Indian subsidiary. “The company is both reducing the need for fossil fuels and helping to expand access to finance in low-income communities.”

By supporting financially sustainable clean energy organisations and projects, Oikocredit aims to meet the growing demand for electricity in underserved regions, help rural communities to improve their livelihoods, and combat climate change. Funding off-grid electricity initiatives is a critical part of this. From E-Hands’ perspective, working with Oikocredit allows the company to access funding from an experienced, credible, social impact organisation.

Prior to awarding the loan, Oikocredit sought to understand E-Hands’ business in depth and evaluated the company against rigorous criteria.

“It was very important for us to get to know the business and identify the most effective solution to help E-Hands achieve the greatest social impact,” explains Kiran Kodi.

Each bank branch is fitted with a solar system of one kilowatt-peak (1 kWp) generating capacity, allowing the banks to power a mobile internet hub with between five and ten connections, a satellite communication terminal and a micro ATM. In addition to covering their computing and lighting needs, a battery back-up system also provides back-up power for more than six hours, while reducing the branches’ electricity costs compared to alternative power sources, such as generators. Each branch can also track their electricity use remotely.

In less than a year, E-Hands has already delivered solar power to nearly all of the 119 banks, helping the Union Bank of India to bring access to finance to some 35,000 people in rural communities, while saving approximately 170 tonnes of CO2 equivalent. Families can now access basic financial services on their doorstep, while aspiring micro-entrepreneurs, small businesses and farmers can also gain access to the credit they need to grow. This in turn brings new services to communities, such as tailors, barbers, small grocery stores, internet centres and restaurants.

The success of E-Hands solar-powered banking service is helping the company itself to expand too. Since being awarded the Oikocredit loan, it has recruited five more people, bringing its team to 40 in total.

“Executing this project has given us the confidence and credibility to take on more projects leading to the financial inclusion of more underserved communities,” says Raghu Chandrasekaran, E-Hands’ CEO.

Oikocredit remains in regular contact with E-Hands, and shares valuable advice to help the company develop a long-term funding strategy that includes multiple financing options, including loans from mainstream banks.

“Through our partnership with Oikocredit, we gain a trusted financial partner with sound knowledge of the clean energy space, and better opportunities for future support from other impact investors,” explains Raghu Chandrasekaran.

Beyond solar-powered banking, E-Hands also partners with grassroots organisations to provide 1kW solar micro-grids to individual households, providing families with a healthier, more affordable source of power. It also sells and distributes solar home lighting systems to rural families and micro-entrepreneurs. The company has brought clean energy to 150,000 people since its inception in 2009, saving 2,500 tonnes of CO2 equivalent. 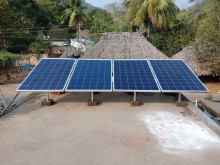