The harvest promises to be good for coffee farmers who are members of the Chajul cooperative in Guatemala. Asociación Chajulense Va’l Vaq Quyol (Chajul) has organic and Fairtrade certifications and is always there when members need support. Chajul is one of Oikocredit's oldest partner organisations, and a good example of solidarity and sustainability.

Coffee farmer Domingo Medina Zacharias dreams of planting new coffee trees, those resistant to diseases like coffee rust. But it is not that easy. His plot of 0.8 hectares offers little space for new trees. Even if he could afford to buy new coffee trees with the support of Chajul, of which he has been a member since he was 30 years old, he would have to remove the old trees and wait three years for the first harvest after planting the new ones. How could he and his family live in the meantime, his wife Catarina Lopez Gomez and their two children? Many of the 1,300 coffee farmers in the highlands of Guatemala who have joined together in the Chajul cooperative feel the same way.

A better life in the cooperative

Thanks to the work of the organisation, farmer Domingo Medina Zacharias still earns enough for his family to make ends meet. More than twenty years ago, he started to produce coffee in addition to the regional staple foods of beans and maize, in order to improve his income. Talking about the benefits of being a member of the cooperative he says: "I get technical support to help me produce better. I can get a loan to buy seedlings and the cooperative pays a good price for the coffee."

Chajul processes and markets only high-quality organic coffee and was certified according to fair trade standards as early as 1992. The organisation's general meeting decides how the Fairtrade premiums are spent. Domingo Medina Zacharia says: "Seventy-five per cent of the premiums are paid directly to us, the remaining twenty-five per cent is used for technical assistance to improve the coffee trees and the soil, and to supply us with pumps for liquid fertiliser." Chajul also invests in model plantations to see which coffee plants thrive best under climate change conditions and are particularly resistant. Part of the Fairtrade premium has been used to purchase environmentally friendly solar-powered drying machines.

The Chajul organisation embodies its attitude in its name: Asociación Chajulense Va'l Vaq Qujol. Va'l Vay Quyol translates from the Ixil language as "Together with one voice". Chajul works in the Ixil Community. In the mountainous region of the northwest of Guatemala, thousands of people were killed, tortured or disappeared during the violent conflict between the army, left-wing guerrillas and death squads between 1960 and 1996. The victims were mainly members of the indigenous Ixil population, descendants of the Maya.

Work the soil without violence

It is like a beacon of hope, with Chajul farmers following a traditional Mayan maxim: "Work the soil without violence". The organisation is organised as a cooperative, involving women in all areas of work, the governing body consists of members and is newly elected every three years at the general assembly. Over 1,500 members, mostly Ixil, live in 56 communities in the regions of Chajul, Nebaj, Cotzal and Chiantla. They mainly produce coffee (with 1,300 coffee farmers), but also honey and handicrafts.

From production to export, the cooperative makes sure that all working practices are environmentally friendly, as well as economically, socially just and culturally appropriate. With income from coffee exports, Chajul supports local communities with poverty alleviation projects, such as educational programmes, training in environmental management or improving coffee production processes. Members and young people from the local communities run La Posada, an ecological guest house for tourists and visitors.

Even now, during the coronavirus pandemic, Chajul continues its work. During the hardest lockdown period in the spring of 2020, staff were working from home and members' communities were supplied with provisions. The current harvest promises to be good. The cooperative hopes to process and sell at least 10,000 bags of coffee, each 100 pounds (46 kg). That means an estimated € 2 million in income.

The organisation's financial situation is solid. It has just repaid an Oikocredit loan for export pre-financing and a new loan is in progress. Chajul is one of Oikocredit's oldest partner organisations. In 1990, Oikocredit approved Chajul’s first loan for US$ 280,000 at a time when no conventional bank was willing to lend a single quetzal to the initiative of the 40 coffee farmers had who founded the organisation in 1988. 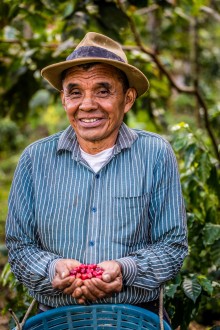