Oikocredit’s work and plans in Brazil

Oikocredit’s work and plans in Brazil

Oikocredit’s office in Brazil is one of several country offices the global cooperative has in Latin America and the Caribbean. We recently interviewed our Brazil Country Manager, Nicolas Viedma, to talk about some of the most pressing issues and plans for Oikocredit in the country.

Nicolas, where are we meeting you right now?

Nicolas Viedma: During the coronavirus pandemic, we are working from home as much as possible. So you are meeting me in my home office. I live in São Paulo, the largest city in Brazil. Twenty million people live in the metropolitan region, 11 million directly in the city. We are downtown, right in the middle. From the window of my 17th-floor apartment, I can see a lot of really tall buildings. Right across the street is the hospital where my wife works, in the emergency department. It's a large private hospital, so the situation isn't as scary as elsewhere, but even there the intensive care unit is very busy. São Paulo is particularly affected by Covid-19; times are tough. As in all of Latin America, the pandemic has shown clearly how stark social inequality is. The number of low-income people living below the poverty line has doubled during the pandemic.

What is the situation in Oikocredit's Brazil country office? Has the demand for your work and for financing grown because of the pandemic?

Nicolas Viedma: At the moment, our team of three has more requests from organisations to work with us than we can satisfy. It used to be different. A few years ago it was more often us who were looking for partners. The need for funding is expanding. One reason is that organisations know they will need external funding after the pandemic. There is a well-positioned state development bank, but it cannot do the job alone, and the concentration would be far too great. That means our work is in demand. But not all organisations have reached the stage of social impact where they would be suitable for us.

What are some of the organisations you work with? What are your plans for Oikocredit in Brazil?

Nicolas Viedma: Currently, we have 22 partner organisations in Brazil. Most of our partners are microfinance institutions, often non-governmental and traditional grassroots organisations. We see our main task as putting social impact management more on their agenda. Most partners are open to this, but they are not the size we would like them to be. They have loans of half a million or a million dollars. That's why we started working more with credit cooperatives in 2017. They are larger and, thanks to the way they are organised, they are ready to focus more on social performance.

Because Oikocredit International's future work is being discussed in terms of stronger links to local communities, partnering with cooperatives makes double sense. Through cooperatives, access to communities is easier; they are located in the communities and interested in solving local problems. We can build on this.

In the current year, we have already disbursed loans for two credit cooperatives, both of which are relatively large and well embedded in rural areas in the south. Cooperatives are traditionally stronger there. There are functioning networks that are steadily growing. In addition, the central bank supports their development.

Within three months, our country office approved US$ 8.0 million for cooperatives. Our approved portfolio has already grown by 40%, as of June 2021, even during the pandemic. And we want to keep growing. Not as an end in itself, but to achieve more social impact. Anyone who wants to work with us needs a social plan in addition to the economic one. That is mandatory. We help partners to increasingly strengthen and differentiate themselves. Both aspects of their work – the social and the monetary – benefit from this. We want our partners to improve their social impact management; the partners want to move as far away as possible from the traditional banking model, which they experience as exclusionary.

Which is your youngest partner organisation and how do they work?

Nicolas Viedma: Our newest partner is Cresol, an association of more than 80 savings and credit cooperatives nationwide. We work directly with two of these first tier cooperatives, Cresol Tenente Portela and Cresol Centro-Sul. Originally, Cresol was aimed exclusively at rural populations. But because demand in the cities is growing, and many people commute between rural and urban areas, the association is now involved in urban areas as well, serving mainly small to medium enterprises.

We like the way Cresol works. While they also use digital technologies, they work through a network of branches, because everyone involved is convinced that personal relationships with clients are still important and necessary. While banks are closing more and more branches, Cresol is doing exactly the opposite. In areas where banks are leaving, the association is opening new branches.

Another interesting cooperative partner is Sulcredi, which offers various services in addition to their core business. For example, all members can use a number of medical services that the cooperative pays for. The cooperative also provides lower-cost access to services from rural telecommunications companies that exploit their monopoly positions and overcharge for their products.

Is this the gap where new opportunities arise for social investors like Oikocredit – or is it difficult to break open this closed society?

Nicolas Viedma: At present, the central bank is promoting the diversification of finance. That's another reason why we currently have so many good new opportunities to invest and find new partners. We are interested in credit cooperatives and fintech companies. These are exactly the two areas that the central bank has been pushing for the last five years or so. Oikocredit International, as you know, has also recently invested in the Brazilian fintech company BizCapital, which aims to promote small to medium enterprises and thereby create jobs. This segment of the economy is extremely active. The dream of every fintech company in Latin America is to invest in Brazil or in Mexico.

What do organisations you work with and their clients need most in the current situation?

Nicolas Viedma: They need money for training, product development, financial education and digitisation, among other things. Small to medium enterprises in particular face a huge gap in financing. There is an urgent need for improvements in the housing situation and in water supply. Brazil has enormous natural water reservoirs, but they are not well managed, just like the forests in the Amazon. Previously, for example, agricultural producers could obtain fresh water by digging 10 or 12 metres into the ground. Now they have to dig more than 100 metres down to find fresh water. Farmers need technical support, know-how and financial products to help them produce more sustainably.

As a team, do you have direct contact with the individual cooperatives and their clients?

Nicolas Viedma: A few weeks before coronavirus broke out, we spent two weeks in the south where some of our new partners are located. During such visits, we go to the branches and talk to staff and clients to hear their stories and understand their needs. This time, we had the opportunity to attend preparations for the annual meeting of one organisation, where we presented Oikocredit’s work. About 400 cooperative members participated, mostly agricultural producers, fruit growers, livestock and dairy farmers, and small-scale local entrepreneurs. They sat with their arms crossed. We are used to that. They are sceptical. They see us as the classic bankers from the big city who want to offer or sell them something far removed from their needs. I understand that. I grew up in the countryside. Then, when we tell them about Oikocredit's history, its approach and its cooperative structure, people open up and start smiling. That is the beauty of our work.

What do you see as the most important issues for Brazil at present?

Nicolas Viedma: A better relationship with the natural world, protecting natural resources and our human and cultural characteristics. For me, the Black Lives Matter movement should become much more important in this country. But there is a lot going on. Just five years ago, Afro-Brazilian women were ashamed of having curly hair. Today, there are cosmetics brands that are specifically anti-discriminatory. Much of what is now considered national culture has come from Africa, Europe and Asia and has been integrated. It's all about being receptive to that change all the time. And right now, we need to target transformation at all levels.

A while ago I was asked to participate in the Economy of Francesco, an initiative of the Pope. We are a group of changemakers and scholars who are networking around the world to try to find solutions to pressing problems. This includes Amartya Sen and Mohammed Yunus, but above all many young people. It is about a change in economic thinking that takes into account the limits of resources and focuses on humanity. We work both theoretically and practically. Most recently, we supported a social business in Havana, Cuba, that provides mattresses for elderly people. For me, this is not far from my work for Oikocredit.

Nicolas Viedma joined Oikocredit in 2015 from a traditional bank and has been country manager for Brazil for two years. Nicolas spent a year living in Darmstadt and Dresden in Germany while studying economics. 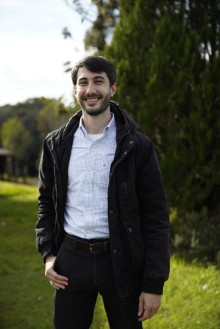