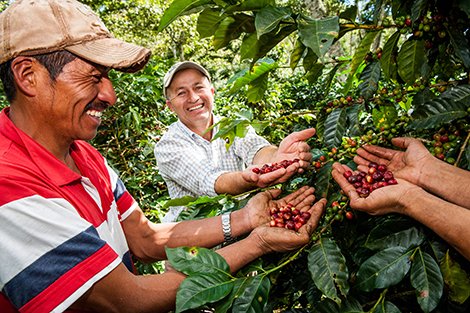 Founded in 1999, COCAFCAL began its operations with only 55 members which have since grown to over 800. COCAFCAL produces and sells ‘strictly high-grown’ Arabica coffee with Organic, Rainforest Alliance, Fair Trade, JAS, CAFÉ Practices, UTZ Certified and Bird Friendly certifications. COCAFCAL produces and commercialises around 110,000 bags of green coffee a year, 95% of which is sold directly to American, European and Asian markets.

Recently, this important sector was struck by a fast spreading fungal disease with the potential to devastate farmers and the entire industry. The fungus causes coffee leaf rust, infecting the coffee plant’s leaves, making them fall off and weaken (and in extreme cases, kill) the coffee tree. With the potential to destroy COCAFCAL’s entire business, the cooperative has been working hard with its members as well as Oikocredit to combat the disease.

Oikocredit country manager for Honduras, Gerardo López, said COCAFCAL, as well as other partners, has been working hard to make sure its operations and staff are not devastated by the disease “COCAFCAL created a laboratory for research into coffee diseases such as coffee leaf rust, and has also taken the measure to slowly plant new trees that are more resistant to the disease,” said Gerardo. “Oikocredit also provided around € 70,000 in capacity building funds in the region specifically for rust-related activities,” added Gerardo. A coffee strengthening programme was also developed in Oikocredit’s Central America region to support affected coffee-producing partners.

Oikocredit also united with international coffee importer, Sustainable Harvest, to finance a series of workshops and conferences in Latin America focussed on rust management and control. A number of Oikocredit partners have taken a proactive approach by initiating their own rust management programmes. While the threat of coffee leaf rust remains, Oikocredit will continue its support of the coffee value chain, providing partners with financing, training and technical assistance.