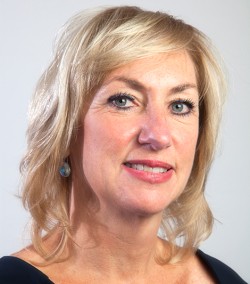 Wendy Plant has been with Oikocredit for over 30 years, making her Oikocredit’s longest standing employee. Initially joining as an administrative staffer after moving to the Netherlands from her native Australia, Wendy’s role has changed many times over the years she’s been with the organization. Based at Oikocredit’s International office in Amersfoort, Wendy is now personal assistant to the managing director as well as travel officer, organizing all staff, board and annual general meetings, arranging staff exchanges and trainings that take place at the Amersfoort office for the cooperative. In recognition of her dedication to Oikocredit, we asked Wendy to share some of her experiences and insights from her time with Oikocredit.

Why did you join Oikocredit?

“It was the early 1980s and I was travelling across Europe. It was here in the Netherlands that I met and fell in love with my husband, a Dutchman. My family’s roots are also here, so I decided to stay. Once I learnt Dutch, I built on my secretarial skills. It was then that I saw an advertisement in the paper for an administrative support position with Oikocredit, which was in English so therefore quite noticeable for me! At that stage in my career the notion of working for an international development organization was also quite appealing to me.”

What was working at Oikocredit like when you joined?

“When I first started, Oikocredit was in its infancy, with only four people in the Amersfoort office and around five in the regional offices. Now, 30 years on, we have around 400 staff across our international office, regions and support associations, with over 600 volunteers. Back when I joined our roles were also far broader, doing everything ourselves, whether it was reporting each share individually in a file, to writing the annual report or making new brochures. I have worked with 7 managing directors.”

“The organization has grown and changed immensely, now having separate departments for communications, finance, IT, renewable energy, social performance and so on. Think of technology and social media.  The professionalism of the organization which is one of the key changes I’ve seen. Oikocredit is no longer a small child; it’s grown and blossomed into a well-respected and mature adult. But in light of all these changes, we’ve never lost sense of why we’re here, keeping our mission is challenging but an integral part of our organization which is important to us.”

What do you enjoy most about working at Oikocredit?

“The people! Whether it be my colleagues and peers in Amersfoort or across the globe, it’s always been the people who’ve made this job for me. I am lucky to have a position where I get to meet people from such diverse cultures. I have the opportunity to travel once or twice a year to a country where Oikocredit is active, which is also a great opportunity for me to see Oikocredit’s work in the field. I get to learn about different cultures this way, which I find to be very valuable both professionally and personally.

What does working for Oikocredit mean to you?

"It means a lot to me. In my positions I’ve been able to use my various different skills throughout the entire organization. I've also been able to be part of the bigger picture and to have input in various ways. What Oikocredit is doing in the world is of great importance and has great impact for many people and their communities, which means a lot to me."